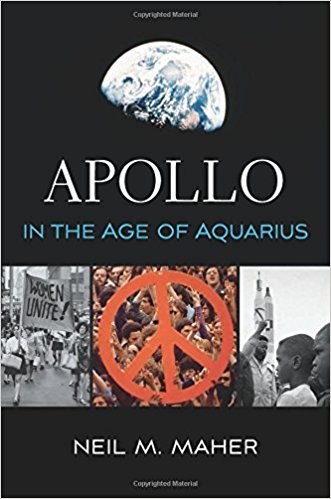 The American Astronautical Society is pleased to announce Apollo in the Age of Aquarius, by Neil M. Maher, is the winner of the 2017 Eugene M. Emme Award. The annual Eugene M. Emme Astronautical Literature Award, named for NASA’s first Historian, recognizes an outstanding book that advances public understanding of astronautics. Maher is Professor of History at the New Jersey Institute of Technology and Rutgers University, Newark.

The Emme Award Selection Committee praised Maher’s work for its cross-disciplinary approach to the study of a well-known subject in space history, one that allowed Maher to put the Apollo Program into an entirely new perspective. Written in an engaging manner and thoroughly researched, Apollo in the Age of Aquarius represents a work that truly fulfills the standard of excellence embodied in the Eugene M. Emme Award.

“As we approach the anniversary of the first moon landing, this selection by the committee turns out to be an especially timely look back at the dynamics between the U.S. space program, politicians, and society in general during the Apollo program,” said AAS Executive Director Jim Way. “We are very pleased with the selection and are happy Mr. Maher is being recognized for his excellent efforts.”

The summer of 1969 saw astronauts land on the moon for the first time and hippie hordes descend on Woodstock for a legendary music festival. For Maher, the conjunction of these two era-defining events is not entirely coincidental. Apollo in the Age of Aquarius shows how the celestial aspirations of NASA’s Apollo space program were tethered to terrestrial concerns, from the civil rights struggle and the antiwar movement to environmentalism, feminism, and the counterculture. Against a backdrop of Saturn V moonshots and Neil Armstrong’s giant leap for mankind, Apollo in the Age of Aquarius brings the cultural politics of the space race back down to planet Earth.

Please visit the Emme Award webpage for additional information about the award, previous winners, and the nomination and selection process.