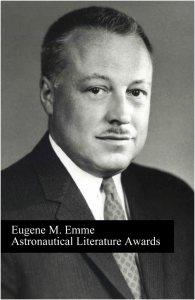 The annual Eugene M. Emme Astronautical Literature Awards, named for NASA’s first Historian, recognize outstanding books that advance public understanding of astronautics.  They reward originality, scholarship and readability.  Anyone, including authors and publishers, can submit a title for consideration.  Submittals are limited to English-language books published (original appearance or new addition) on any of a number of aspects of spaceflight in a variety of disciplines and ranging from juvenile and pop literature to texts intended for academia or practicing scientists and engineers.  In addition to obvious topics of human spaceflight and unmanned interplanetary explorations, nominated titles may also cover related subjects such as astronomy and cosmology, as well as the occasional non-astronautics title that has a space “flavor.”

Two additional awards known as Emme Juniors were added in 2009 for books written specifically for children (K-5) and young adults (6-12). They recognize efforts to inspire and educate today’s students (and future leaders) through publications aimed at K-12 students.

A review panel of the AAS History Committee selects the award recipients. The Emme Award cycle is as follows: