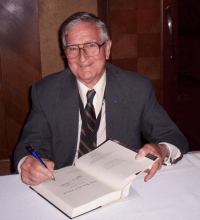 Nominations are now being accepted for the American Astronautical Society’s Ordway Award for Sustained Excellence in Spaceflight History.

The Ordway Award is named in memory of Frederick I. Ordway III (1927-2014), human spaceflight advocate and chronicler of the history of rocketry and space travel. The award recognizes exceptional, sustained efforts to inform and educate on spaceflight and its history through one or more media, including (1) writing, editing, or publishing, (2) preparation and/or presentation of exhibits; or (3) production for distribution through film, television, art, or other non-print media. The award is managed by the AAS History Committee.

Nominations are due July 1.