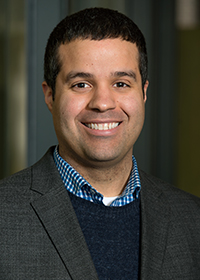 Richard Linares is the Co-Director of the Space Systems Laboratory at MIT and holds a Charles Stark Draper Assistant Professor position at MIT’s Department of Aeronautics and Astronautics. Richard Linares joined the Department of Aeronautics and Astronautics in July of 2018. Before joining MIT, he was an Assistant Professor at the University of Minnesota’s Aerospace Engineering and Mechanics Department. He received his B.S., M.S., and Ph.D. degrees in aerospace engineering from the University at Buffalo, The State University of New York. He was a Director’s Postdoctoral Fellow at Los Alamos National Laboratory and also held a postdoctoral associate appointment at the United States Naval Observatory. His research areas are astrodynamics, estimation and controls, satellite guidance and navigation, space situational awareness, and space traffic management. Richard Linares is a recipient of the AFOSR Young Investigator Research Program Award in 2018 and the DARPA Young Faculty Award in 2020.