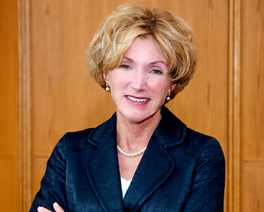 During her tenure, the university has tripled undergraduate applications, become twice as selective and dramatically improved the academic credentials of the entering class. Case Western Reserve reached its expanded $1.5 billion Forward Thinking capital campaign a year and a half ahead of schedule, although it continues to the end of 2018. Among the highlights of the university’s capital campaign are dramatic increases in the number of endowed professorships and student support, as well as additional new building projects. In 2014, the university opened the $50 million, 89,000-square-foot Tinkham Veale University Center, as well as the 24,000-square-foot Wyant Athletic and Wellness Center. In 2015, the university celebrated completion of initial phases of two extraordinary renovation projects—the Maltz Performing Arts Center ($30 million for phase one) and the Larry Sears and Sally Zlotnick Sears think[box] in the Richey Mixon building ($35 million for entire project). Sears think[box], the university’s 50-foot innovation hub, is the largest university-based innovation center in the United States.

In 2013, Case Western Reserve entered into a historic partnership with Cleveland Clinic to develop a 485,000-square-foot Health Education Campus including the university’s schools of medicine, nursing and dental medicine and is scheduled to open in spring 2019. In addition to the university’s collaboration with Cleveland Clinic, Case Western Reserve is also engaged in a partnership with the Cleveland Museum of Art to establish a globally recognized institute dedicated to innovative education and training of future curators in the history of art and its practice in art museums. And, we are partnering with the Cuyahoga Community College to support a humanities pipeline program to develop a targeted and robust pathway for students to pursue a bachelor’s degree in the humanities, which builds on our earlier STEM (science, technology, engineering and mathematics) pipeline programs.

Snyder began her academic career as an assistant professor at Case Western Reserve’s School of Law, then joined the faculty of Moritz College of Law at The Ohio State University. After serving in several leadership positions at Moritz and within the central university, Snyder became OSU’s Interim Executive Vice President and Provost in 2003 before securing the permanent position the following year. She graduated from the University of Chicago School of Law, where she served as executive editor of its law review, and earned her bachelor’s degree from Ohio State.

Snyder is chair of the board of directors of the American Council on Education, a director of the Association of American Universities, Business-Higher Education Forum, Greater Cleveland Partnership, and a trustee of Internet2 and University Circle, Inc. She is also a director of KeyCorp and Progressive Corporation. She is a member of the Ohio Business Roundtable and an elected member of the American Law Institute.