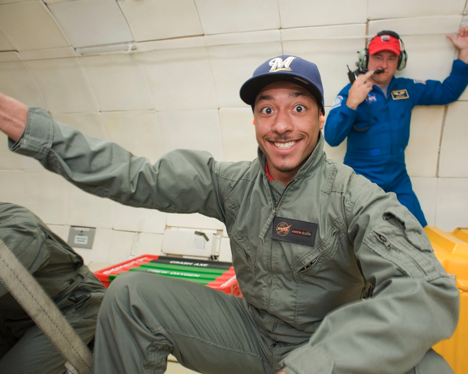 Inside the Mind of a Young Professional: A Conversation with Aaron Olson

Tell me about the path you took from your home in Kikwit, Congo that eventually led you to co-founding NovoMoto and working at NASA’s Kennedy Space Center.

I was born in a clinic in Kikwit, and at the time, the electricity grid would shut off after about 9 p.m. Everything ran off diesel generators. There wasn’t really a serious electricity system, even in the more downtown areas of Kikwit. My mom gave birth to me with just a nurse and a kerosene lamp after the electricity cut off. It worked out, luckily for us. We moved back to Kinshasa not that long afterwards. But then the Mobutu regime, led by a dictator who ran Congo from 1965 until 1997, started to fall apart. It was highly recommended that all Americans go back. So, we did. My dad brought us back to Wisconsin where he had some family and roots. That’s where I grew up—in Madison, Wisconsin, and I ended up going to school at the University of Wisconsin–Madison for mechanical engineering from 2007 to 2012, with a little break in between when I did a study abroad program in Toulouse. I also took a semester off to intern in Langley Research Center. After that, I went to grad school for a similar area: engineering mechanics in the Engineering Physics Department, also at Wisconsin. I worked with Dr. Gerald Kulcinski and Dr. John Santarius for my research on space resources. We were taking a look at how to harvest soil on the Moon to be able to produce fuel and life support from volatile resources like water, hydrogen, nitrogen, and helium-3 that could be used for power in the future. The research was in collaboration with Kennedy Space Center, giving me a chance to work with Dr. James Mantovani and other researchers in the Swamp Works Labs.

What inspired you to go into the space industry?

Well, my brother went to school to be an engineer before I did. I’m one of four siblings, and my brother immediately older than me ended up going to school to be an electrical engineer. I think that had a big influence on me. I knew I was interested in in a STEM field: science and math were areas that I enjoyed in high school and in middle school—basically, as long as I can remember. Engineering seemed like a way to apply my passions practically to solve real challenges that people or communities in general had in their lives. I didn’t know what field of engineering I’d really be interested in, so I went into the broadest field that I knew of at the time, which was mechanical engineering. And by the time I was in my second semester as a freshman, that’s when it really clicked for me that space was going to be an area in which I wanted to apply my engineering skills. After my sophomore year of college, I got accepted into the NASA Academy internship program at Goddard Space Flight Center. 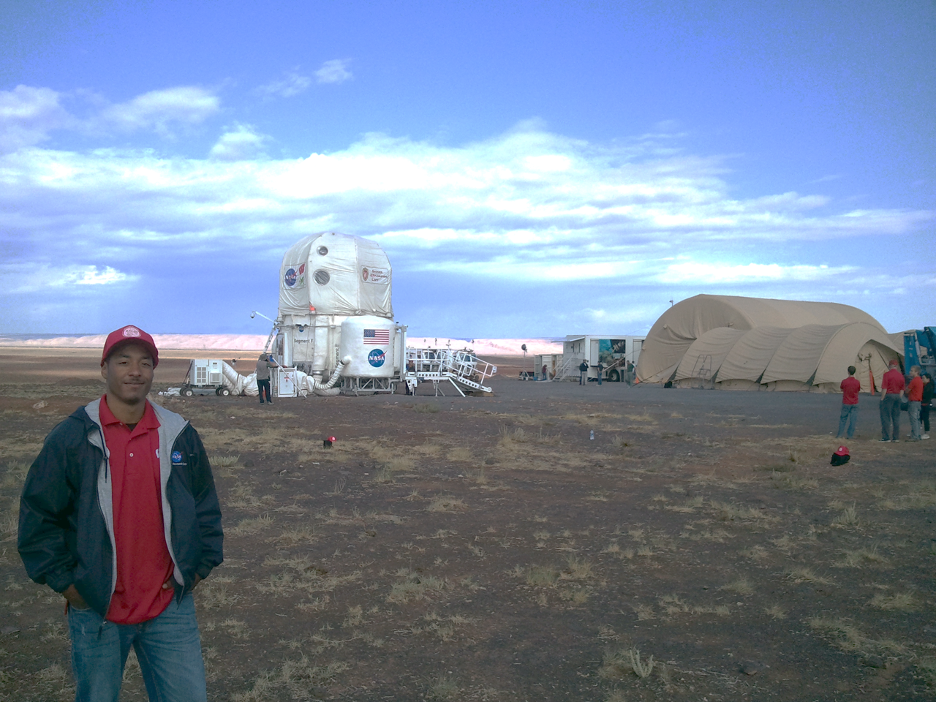 How did your NASA internship affect the trajectory of your career?

Once I was in the door, my eyes just got wide. It’s one of the larger NASA centers; it has a huge campus and a lot of diverse projects going on. Goddard was awesome. I learned a lot. And in particular, I learned about the Constellation program. Constellation was sort of a precursor to what Artemis is now. The program was cancelled a year after my internship, but it was still inspiring, and it got me really interested in trying to develop technology for the lunar surface. A few months after I got back from the internship program, a group of students and myself at UW got involved in X-Hab—the inaugural NASA X-Hab project where they challenged universities to build an expandable second and third floor that would go on top of this prototype habitat unit at Johnson Space Center. We were selected for the project, competed against Oklahoma State and the University of Maryland, and won first place. We built this expandable habitat, almost like a sophisticated tent. It collapsed down to about a foot in height, and it got up to I think 12 or 13 feet tall. We built out the entire system like a real house: we had an electrical system, we had an HVAC system, and we had windows and hatches…we had the whole thing. It was an awesome project to be a part of. We learned a lot as a team. And winning was a feather in our caps. You know, it gave us a lot of confidence. It was it was also a big step forward for everyone in their career, and to have that win on our resumes, I think, really went a long way.

What led to your co-founding of NovoMoto?

Throughout my Ph.D., I ended up taking classes in the business school, initially just for interest. But once I had taken enough courses, I decided to make it my Ph.D. minor. During that process, I took a course that that pushed a group of students and myself to build a business model around the concept of off-grid electricity. At first, it was just a class. But as it happened, at the beginning of the class, I actually went back to Congo for the first time. I got a chance to meet some of my mom’s side of the family, to see Kinshasa and some of the outskirts of the city for the first time, too, and had a real understanding of what it was like to live in an area where the grid was either inconsistent or didn’t exist at all. That experience really helped shape my opinion around the viability of what we were doing in that class. About six months after the class ended, my co-founder and I at NovoMoto went ahead and launched the company—we saw it as a real opportunity that was worth pursuing. Both of us were still in our Ph.D. programs at that time, so it was difficult and stressful to get things off the ground, but we managed. And by about the midpoint in 2016, we had raised enough resources to really start a pilot project. And then by mid-2017, we first started serving our first customers just outside of Kinshasa. We’ve been slowed a bit by the pandemic, but we’ve got a lot of equipment that just arrived, and some new team members have helped us amp up our sales, so we’re shooting to serve somewhere around 3,000 to 5,000 customers by the end of this year. 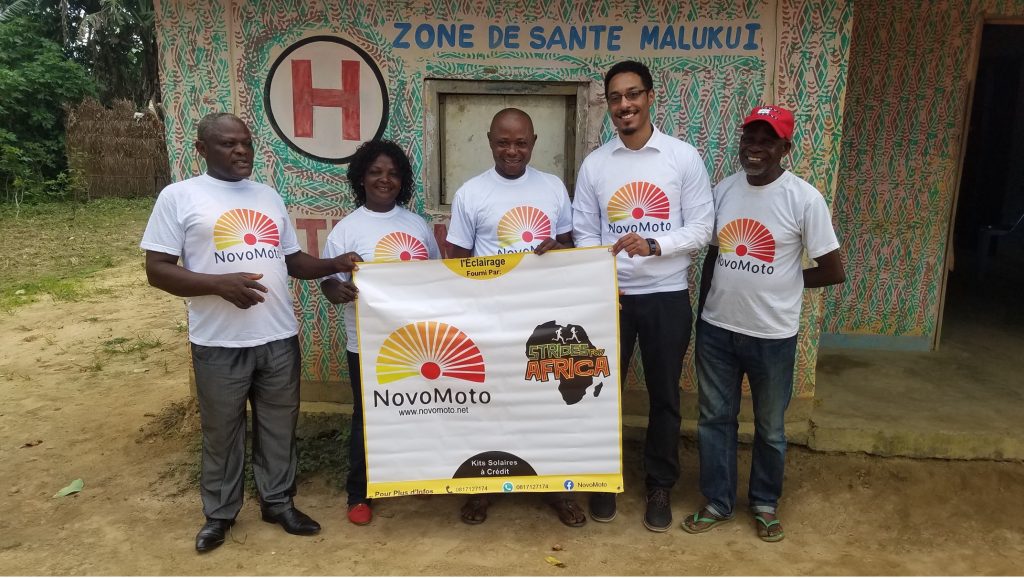 I think a big one is putting myself in the shoes of other people—trying to get an understanding what others are going through and having empathy in terms of seeing where someone’s coming from. Know that their challenges and their path are different than yours, but still be able to listen and then learn from people from all different backgrounds. Another one would be not to limit oneself in terms of goals or objectives. With all the different stereotypes that exist in the world and all the different naysayers who want to tell you that if you come from this area, or if you haven’t done this, you can’t do that…keep everybody else out of what’s going on between your own two ears. Just make your plans, have your own vision for what you want, and work hard to make that happen. Don’t worry about what everyone else is saying so much.

Do you have anything to say to people who want to go into STEM, who want to help others, and have a passion they want to pursue?

There are a lot of different opportunities to solve challenges right now. The world is always changing, but it feels like it’s changing even faster with everything we have access to in terms of communication technology, and the way that we can interact with people all around the world. If somebody has an interest to do something with STEM that can make a difference for people any place in the world, go for it. You can do it as a hobby, you can do it as a part of a club, like Engineers Without Borders, or with a variety of similar programs. You can do it as a part of a grad program, you can do it as an entrepreneur—in a for-profit way, or in a not-for-profit way, or just in a charitable way, where you’re volunteering your time or resources to contribute. I think there’s a lot that can be learned when you branch out and try to get an understanding of other people’s problems. It clarifies what your problems are, and whether you’re viewing them correctly. I would recommend reaching out and trying to find problems that you care about, since there might be an opportunity to be able to assist in some way. 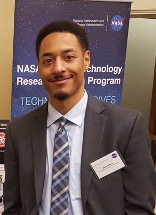 Dr. Aaron David Sumaili Olson is a physicist at NASA Kennedy Space Center in the Electrostatics and Surface Physics Laboratory.  Dr. Olson was born in Kikwit, Democratic Republic of Congo and raised in Madison, WI.  He earned a B.S. in Mechanical Engineering in 2012, completed his M.S. in Engineering Mechanics and Astronautics in May of 2014 and a Ph.D. in this same field in 2018.  During his undergraduate education, He studied abroad at the Institut Supérieur de l’Aéronautique et de l’Espace in Toulouse, France for a semester, had internships at both NASA Goddard Space Flight Center and NASA Langley Research Center, and was part of the 2011 winning NASA Exploration Habitat competition student team that built an expandable module for NASA’S Deep Space Habitat Prototype. As a graduate student, Aaron was a NASA Space Technology Research Fellow.  Aaron co-founded NovoMoto LLC in 2015.  NovoMoto is a social enterprise that provides clean, renewable, and sustainable electricity to communities in the Democratic Republic of Congo (DRC). The company installs solar home systems for off-grid communities and provides pay-as-you-go financing for its customers.  Aaron has recently been named a Forward under 40 awardee from the University of Wisconsin–Madison’s Alumni Association.