Inside the Mind of a Young Professional: A Conversation with Mindi DePaola

Inside the Mind of a Young Professional:
A Conversation with Mindi DePaola 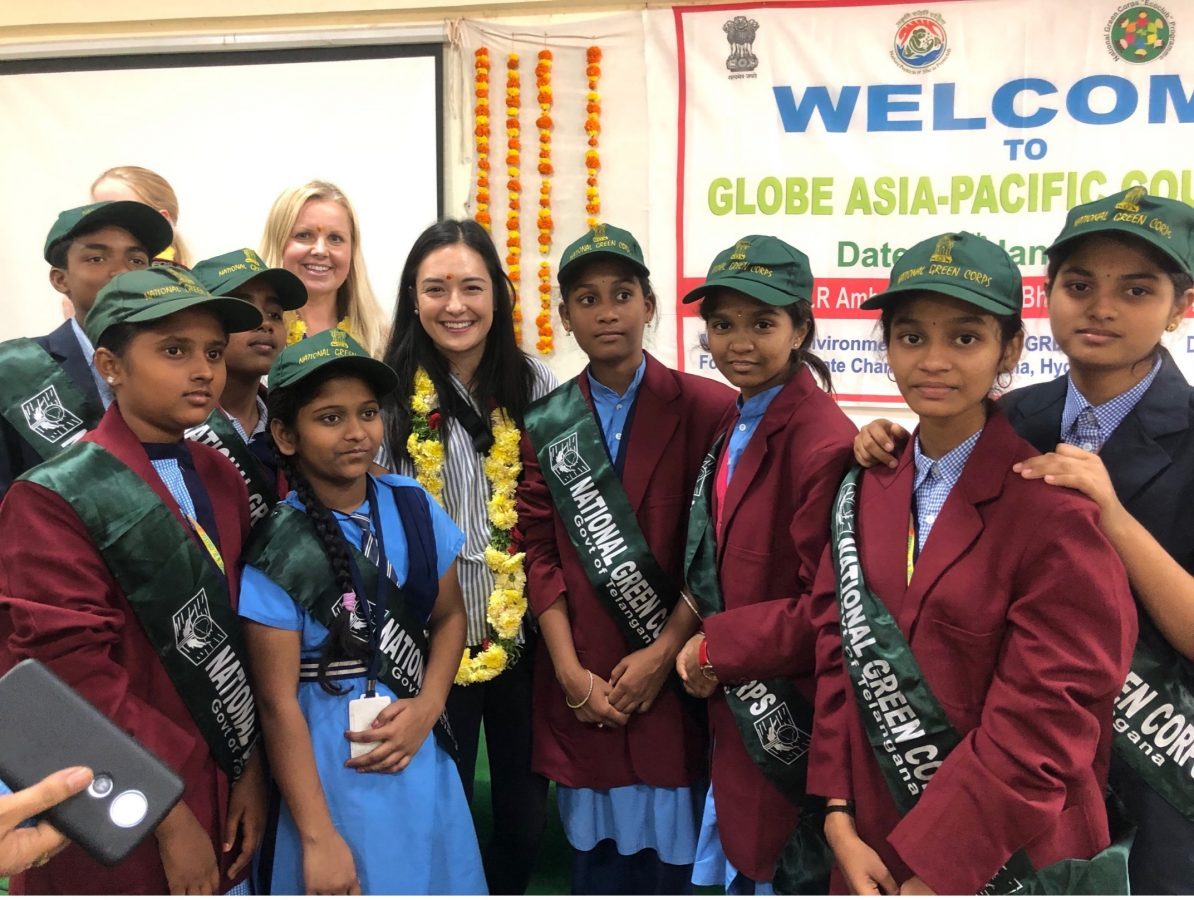 You lived in Peru, you worked in Washington, and now you’re in Colorado. Has traveling impacted you with respect to the work you’re currently doing?

I have kind of been all over the place…that is a very accurate description. I grew up in Kansas and my parents are in academia, so we lived in a couple of different countries on sabbaticals: Denmark, Japan. My mom is an immigrant from Taiwan, so I’ve always had a global perspective. My parents made it a really big priority when we were growing up to travel and to see the world, and to know that you’re a smaller part of this greater puzzle. They really pushed being a global citizen and giving back.

Can you talk more about your time in Peru?

I was in Puno for the first year and a half, which is at 12,500 feet in elevation. It’s super high-up! It’s where the highest-elevation lake is, Lake Titicaca, and it’s also where both the Aymara and the Quechua meet, so most people are descended from indigenous communities or continue to live in indigenous Aymara or Quechua communities. Because of the elevation, it’s a great place to study respiratory health. It’s a really cool place to learn in, and from people who have been there for so long. I was looking at biomass cookstoves and the effect they can have on your health. Traditionally, women cook with biomass stoves, which produce lots of particulate matter in the air—like a fireplace with no flue, nothing around it, and it’s burning pretty much all day. For the second part [of my time in Peru], I lived in Cuzco, which was still at over 11,000 feet. I worked in rural populations there as well—I just never stopped learning from the local communities. Puno, I feel, is the Kansas of Peru. It’s called the Altiplano, “the high plains,” and every Peruvian that I talked to beforehand said, “Why are you going to that city?” which I feel is what people tell me when I go home to Kansas to visit my family, so maybe I felt at home.

If there was anything you could take away from that experience that was the most important, what would it be?

I’m going to give you two; one’s professional, and one’s personal. Professionally, I would say the most important thing I learned is to listen to the local communities, and retaining humility through the listening, because that has proven to be invaluable in all the other work I do—whether or not it’s an indigenous community, whether or not you’re foreign to that community, it’s disheartening to see how many people and projects don’t listen to the community before they come in and tell them what their project is. I think that is something that I will hold forever, and it’s something I feel really happy to have done fieldwork in to learn that firsthand. Personally, a lot of different things happened…I’ve always had issues making decisions: I’m the person that can never decide where to eat or what I want to do, even what I wanted to major in or what to do after college. Peru taught me to go with your gut, and if it’s good, it’s good, and if it’s bad, you learned something, which I guess is cliché, but it took me going to Peru to learn it myself. 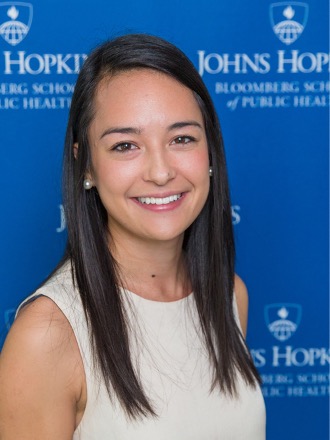 Mindi graduated from Johns Hopkins University Bloomberg School of Public Health with her MSPH, specializing in International Health – Global Disease Epidemiology and Control, and also holds a BS in Biology from the University of Minnesota. CREDIT/MINDI DEPAOLA

What led you to begin working on the GLOBE Zika Education and Prevention project?

I’ve always been interested in the environment, but soon I learned that funding was in health, and not only funding—public interest was in health. Community interest was centered around health. I really liked the intersection between the two, because I care a lot about climate change, but I want to make other people care about climate change. I moved back to Boulder, and I saw this project—as a Program Specialist working with community members and with NASA scientists and sponsors. Knowing other languages was greatly desired and having some international development or health side would be really helpful to connect to the data collection aspect. Citizen scientists are collecting all of this data, which is great; we’re connecting it to NASA scientists, that’s also great, and then, how do we connect it to public health officials so they can use the data? It’s this holistic effort of all these different people, and I sit in the middle of all of it trying to coordinate. For me, it was a perfect storm of all of those things in one position, where I kind of do a little bit of everything— with the GLOBE community at the forefront.

How does your work intersect with the aerospace industry?

The connection I really see is that, at NASA, some scientists are using satellites to observe and keep records of conditions on Earth—temperature, precipitation, land cover—to see how they change over time. Something that they’re starting to look more into is vector-borne disease, because the distribution of mosquitoes, an example of a vector, changes depending on all of these other factors. In warmer temperatures, you may see more or fewer mosquitoes. Or, with more rainfall, you may see more mosquitoes. Mosquitoes breed in water, so all of these things are related to mosquitoes and mosquito-borne diseases. Particularly, now [with COVID-19], obviously, everybody is concerned. Look how much this debilitated us. Our whole world changed, and it’s not crazy to think this could happen with a different disease. Thinking about that, with how NASA has these satellites, the connection is right there between using satellites to inform, or at least model, where vector-borne diseases—at the very least—might be spreading. Of course, there are all of these other applications: NASA also studies air quality, including humidity and temperature, so is there a correlation with one of these factors and an increase in respiratory diseases? There are so many different aspects that NASA is studying that also relate to human health.

Did you do anything interesting during quarantine that you hadn’t tried before?

I live in Colorado, which has been a pretty good place to live in the pandemic, all things considered. I started mountain biking during quarantine. I’m terrible, but I started doing it with my partner’s support and expertise. I also started snowboarding right before the pandemic hit, so I kept that up a little bit. I’m also terrible at that. Finally, I started trail running and ran my first trail half-marathon in quarantine as well. Learning new things is definitely humbling but I would highly recommend it if you have the opportunity. 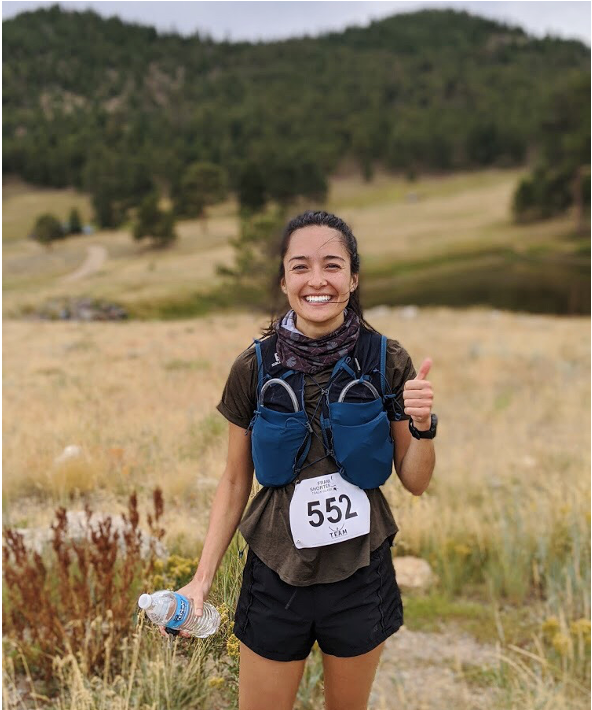 Mindi was 12th in the female category to finish at her first, very socially distanced, trail half-marathon (which she says was also her first half0marathon at all) in Jamestown, CO; August 2020. CREDIT/MINDI DEPAOLA

What is your advice for the rising young professionals in STEM who don’t know what they’re doing in five years, but want to make a difference, like you are?

I have a few points of advice, I guess. One is to seek mentors out and maintain relationships with them. I have had so many strong female role models in work—I’ve had strong male role models, too—starting from the UN with [Guadalupe Durón] and [Virginia Gorsevski], to here, with [Lyn Wigbels], and people in-between and all over. They can help guide you, they can reassure you, they can validate, they can provide other connections…so, that’s the first one: relationships matter. I would be totally remiss not to mention everyone who has supported me. I really appreciate what people have done for me. While I’ve done a fair share, I wouldn’t have done it totally by myself, ever, in a million years.

The second one is that volunteering can be really helpful, for both the organization and for your career growth…I made connections, got to know mentors, and was getting in on things that I, frankly, would have never been able to do without starting out as a volunteer. I’m not trying to promote unpaid labor, and recognize that I hold a lot of privilege in being able to have done some unpaid things, but if there’s a volunteer position that you think holds a lot of value for your career, keep an open mind if you are in a position to do so. Even now, as an early career professional continuing to grow, I’m volunteering for different organizations to broaden my skill set and my network.

The third thing is that everything relates to public health—everything. If you’re interested in data science, aerospace or aerospace engineering, or environmental engineering, all of those things relate to human health. Find what you love, and then figure out later how it connects. I knew I was interested in public health and climate, and I couldn’t figure out how those connected for a specific career path per se, but I kept trying to do one or the other and eventually it merged here.

The last note I have is to advocate for yourself. It’s an invaluable skill; you’ve got to believe in and stand up for yourself, or no one else will. And—if anyone has any advice for me, please feel free to reach out! 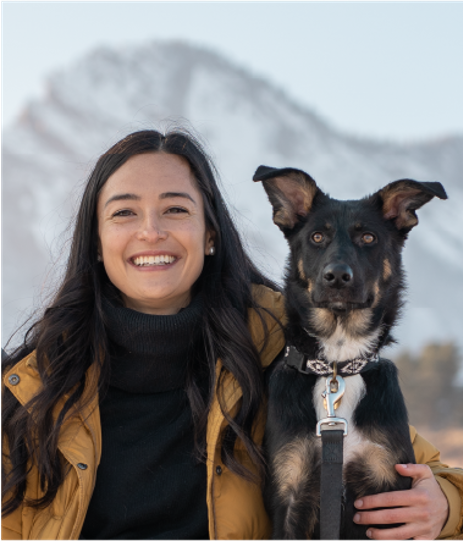 Mindi DePaola is a Program Specialist at The GLOBE Program, leading the GLOBE Zika Education and Prevention Project, an international citizen science project focused on mosquito surveillance sponsored by the US Department of State. She also assists on international coordination and data collection campaigns, both of which are initiatives sponsored by NASA. In addition, she is the Epidemiology Subject Matter Expert at the University Corporation for Atmospheric Research throughout the COVID-19 global pandemic. Mindi graduated from Johns Hopkins University Bloomberg School of Public Health with her MSPH, specializing in International Health – Global Disease Epidemiology and Control, and also holds a BS in Biology from the University of Minnesota. Her previous research and projects have focused on the intersection between global diseases and climate change, particularly Ebola, with the International Medical Corps and black carbon/respiratory health with the United Nations Environment Programme. Most recently, she has moved back to the United States after spending nearly three years living and doing respiratory health public health field outreach work in the rural Peruvian Andes.