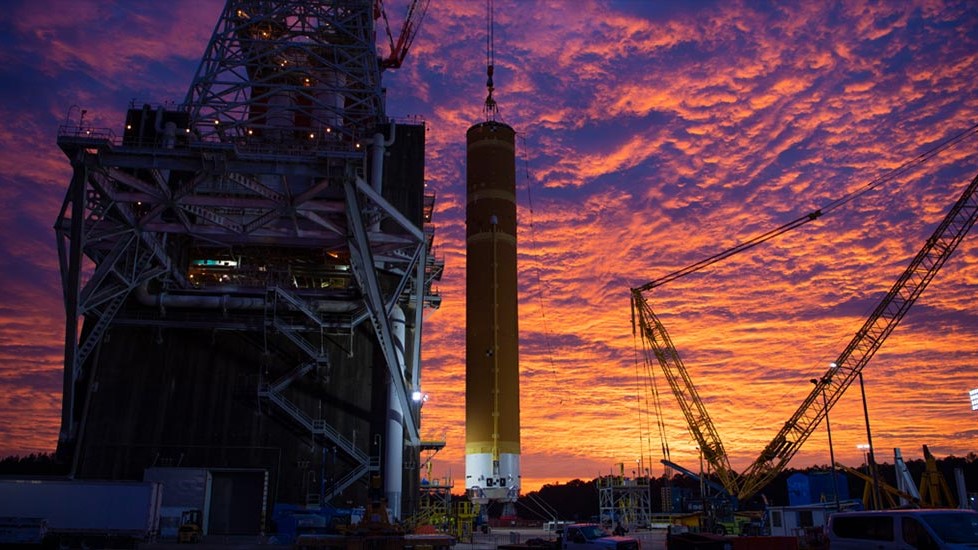 The B-2 test stand at NASA’s Stennis Space Center in Mississippi has been modified to accommodate SLS Green Run testing. Credit/NASA

On Saturday January 16, NASA conducted the final Green Run test of the Space Launch System (SLS) rocket core stage, marking the conclusion of an eight-stage approach to testing the capabilities of the world’s most powerful rocket.

The SLS rocket will propel NASA’s heroic Artemis astronauts further into space than mankind has ever gone before, fueling a new generation of lunar research and exploration. During Saturday’s Green Run hot fire test at NASA’s Stennis Space Center in Mississippi, NASA loaded the SLS fuel tanks with over 700,000 gallons of cryogenic propellant and ignited the four RS-25 engines simultaneously to determine if the core stage is ready for launch. The plan was for all four engines to fire in synchronization for up to eight minutes to imitate the impending Artemis I launch. While NASA completed the countdown and ignited the engines successfully during the test, the engines shut down a little over one-minute into the eight-minute test. NASA has reported that the onboard software acted appropriately and initiated a safe shutdown of the engines.

“Although the engines did not fire for the full duration, the team successfully worked through the countdown, ignited the engines, and gained valuable data to inform our path forward” said NASA Administrator Jim Bridenstine on the success of the hot fire test.

Teams will assess the data collected during the final Green Run test to determine why the RS-25 engines shut down early. The SLS rocket had previously undergone seven additional Green Run tests to ensure that the flight hardware satisfied design objectives, with each test more complex than the last. The data produced from these tests allowed NASA to revise various launch procedures, including updating the terminal countdown sequence, which aided in the completion of Saturday’s test.

“Seeing all four engines ignite for the first time during the core stage hot fire test was a big milestone for the Space Launch System team” said John Honeycutt, the SLS program manager. “We will analyze the data, and what we learned from today’s test will help us plan the right path forward for verifying this new core stage is ready for flight on the Artemis I mission.” 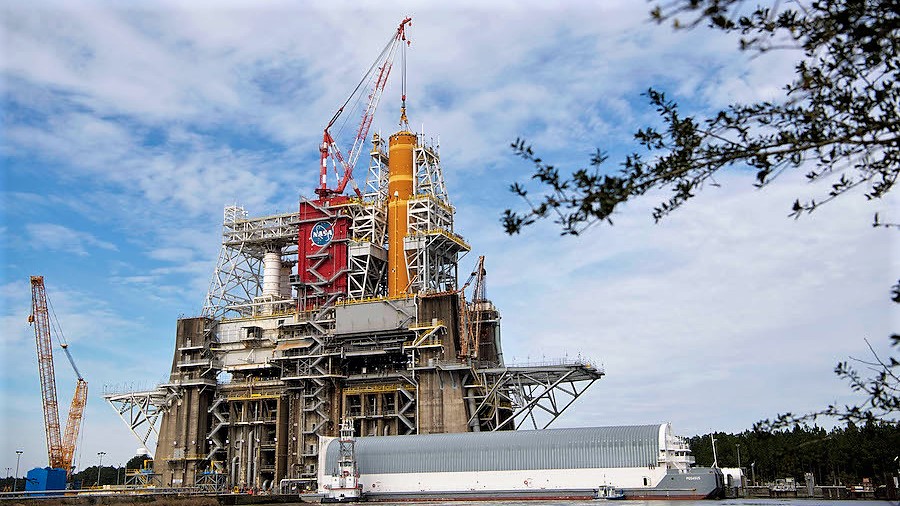 The Core Stage-1 was lifted by crane up over the booster support frame of the B-2 position at the Stennis Space Center. Credit/NASA

America’s rocket will support NASA’s Artemis program, with the historic goal of landing the first American woman and the next American man on the lunar surface by 2024. The SLS is currently the only launch vehicle that is capable of taking crews and cargo together from the Earth to the Moon in a single mission with the Orion spacecraft. While NASA will utilize six different SLS configurations across the various Artemis missions, the 212-foot tall core stage design demonstrated during the hot fire test will be integrated into all six configurations of the rocket. The Artemis I launch will utilize the Block 1 SLS configuration, standing 322 feet tall and weighing over 5.75 million pounds. Boeing is the prime contractor for the design, development, test and production of the SLS core stage and the upper stages, and is responsible for the development of the flight avionics suite.

“Even while working under pandemic restrictions and stopping work for five hurricanes and a tropical storm, NASA and Boeing have made tremendous progress on Green Run testing,” said John Shannon, Boeing vice president and program manager for SLS. “We are doing our utmost to ensure a safe, human-rated rocket that will serve NASA for decades of deep-space exploration and discovery.” 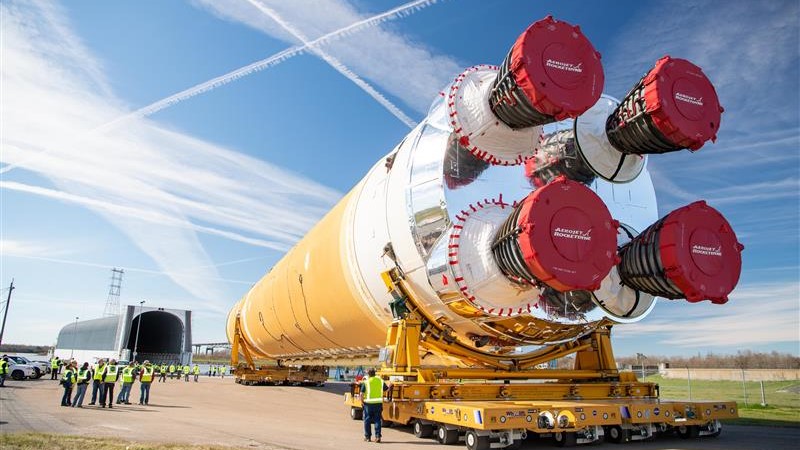 The four RS-25 engines, created by Aerojet Rocketdyne, will provide up to 2 million pounds of thrust, launching the rocket into the next stage of space exploration. Credit/NASA

The world’s most powerful rocket requires the world’s most powerful engines, four RS-25s to be exact. The refurbished engines, designed by prime contractor Aerojet Rocketdyne, are arranged in a square pattern underneath the rocket to provide an even distribution of propulsion forces during launch. NASA has 16 RS-25 engines at their disposal for the first four Artemis missions, including the four engines used in Saturday’s test run. During their contribution to the Space Shuttle Program, these engines powered 135 missions with a 100 percent success rate, and Aerojet Rocketdyne is confident that they will continue to produce exceptional results during the next giant leap of space exploration.

With the final test of Artemis I flight hardware complete, NASA now needs to determine if the core stage is ready to be transported to NASA’s Kennedy Space Center in Florida for integration with the boosters, upper stage, payloads, and Orion crew ship in preparation for its first operational mission. NASA’s unmanned Artemis I mission will set the stage for the next generation of human exploration on the lunar surface and beyond. 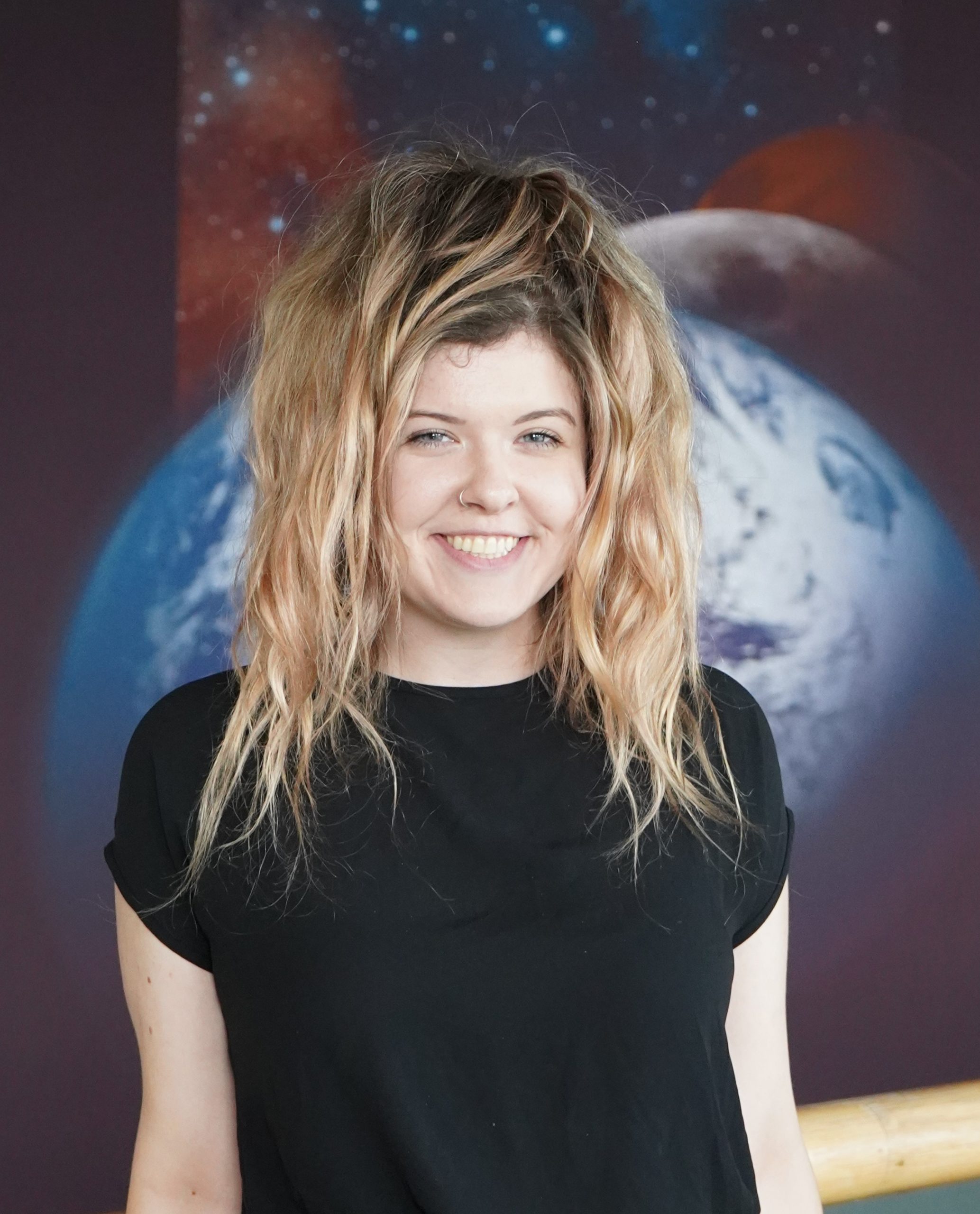