A Look at Artemis: How This Twin Will Go Further – Panel Recap

A Look at Artemis: How This Twin Will Go Further – Panel Recap

NASA’s ambitious goal of landing American astronauts, including the first woman and the next man, on the Moon by 2024 is one of the key objectives of their Artemis program. Building on a half-century of experience, innovative new technologies and systems are recurring themes for ongoing international collaboration to establish sustainable missions by 2028. With the Moon as a stepping stone for Mars and the lessons learned from on and around the Moon in mind for future manned missions to the Red Planet, the Artemis program is indeed an inspiring source for the next generation of scientists, engineers, and program managers. The 2020 virtual Von Braun Symposium shared Artemis through the unique perspectives of the accomplished young professionals working every day to build the Artemis program from the ground up.

Currently, the envisioned plan for Artemis is to send astronauts aboard the Orion spacecraft with NASA’s powerful new rocket, the Space Launch System (SLS). After docking Orion at the Gateway, a human landing system is used for expeditions to the lunar surface. For the return to Earth, the astronauts board Orion at the orbital outpost. 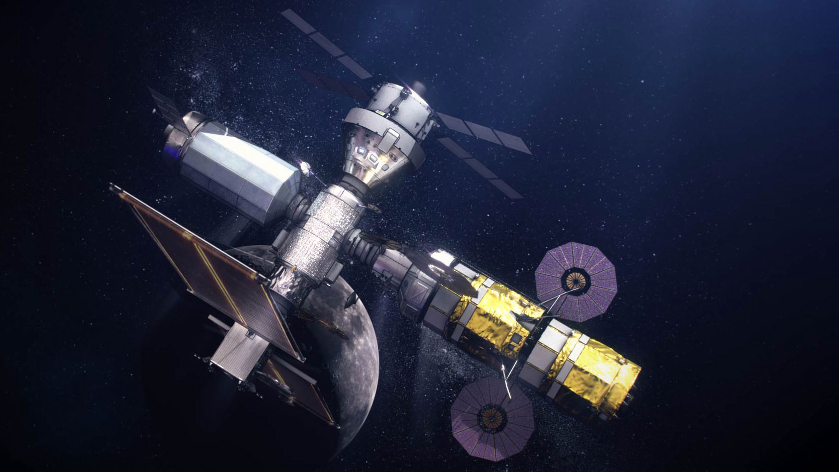 Artist rendering of the Gateway in orbit. Credit: NASA

Recent efforts to make the Artemis program a success was discussed by a distinguished panel of young professionals, consisting of:

Perhaps, the most distinctive part of this session was to hear from panelists who actually worked on the program. The panelists made great efforts to shed light on their side of matters and painted an overall picture of how all their seemingly isolated efforts came together as small puzzle pieces revealing the entire Artemis program. The discussions started with Erika Alvarez (NASA HQ) updating the panelists about the preparation of green run checkout tests at Stennis Space Center, hardware coming together at the Kennedy Space Center, and additional preparations of facilities for supporting Artemis One, Two, and Three.

With an emphasis on ongoing social media campaigns and a diverse panel, the focus quickly turned to Caite Beck (Northrop Grumman Space Systems). Beck highlighted the role of Northrop Grumman in the puzzle by developing and manufacturing the two solid rocket boosters for the NASA SLS. Some of Beck’s reported updates included completion of a five-segment motor qualification in 2016 and an additional successful flight system booster one static test in September. The static test photograph displayed 3.6 million pounds of max thrust for a burn time of just over two minutes for getting humans further than they have ever been. Beck also explained that part of her work was related to the flight system booster one static test disassembly. A critical element, it is notable that after the static fire test, the five different segments have to be taken apart to ensure that the joints and seals operate expectedly. 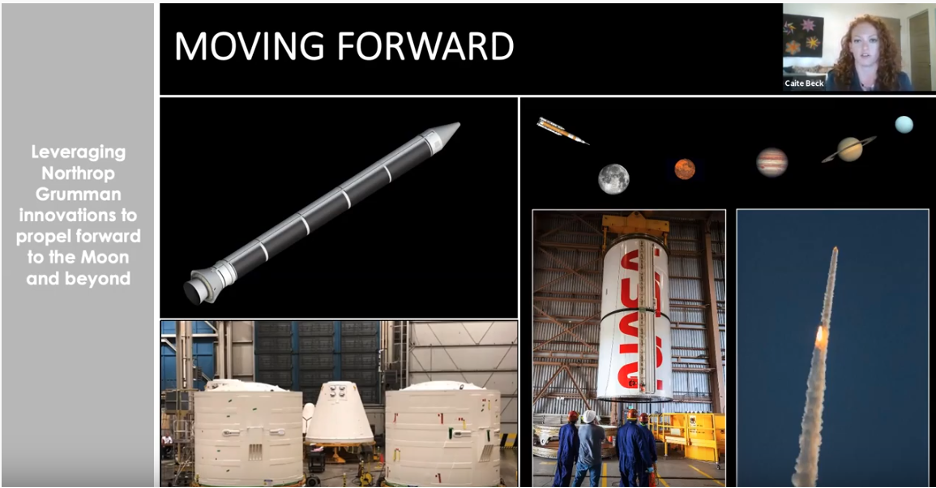 Next up was Tony Castilleja (Boeing Space & Launch) who reported on building the flight hardware and going through a green test run that in essence has yet to go through the full operational cycle. This work consists of taking the flight hardware to flight-ready status by a large number of tests including anything from turning on the flight computers to going through a variety of systems checkouts with the eight full tests that occur for the full system. Castilleja reflected upon his previous shuttle program experience, the benefits of heavy-lift rockets, and the size of the rocket for the tests, standing at a 212 feet tall test stand. He further underscored the American capabilities for super heavy-lift rockets marking that this program would be the only second time in our nation’s history with a 45 metric tons of translunar injection capability. 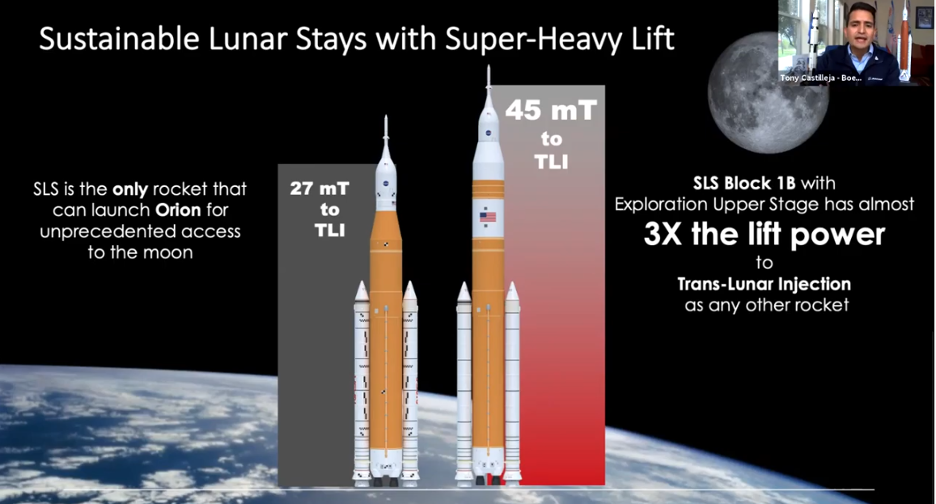 Tony Castilleja of Boeing Space & Launch discussing the heavy lift rockets that will be used to propel the SLS and Orion spacecraft at the 2020 virtual Von Braun Symposium. Credit: AAS

The next panelist, Jonathan Pahed (Aerojet Rocketdyne) built off statements by Beck regarding the solid rockets and RS25 Engines, the core of the SLS for Artemis One mentioned by Castilleja. He also reported that the core stage had been integrated. Awaiting the green room, Pahed also displayed images that showed successful integration of the Orion propulsion and the eight auxiliary engines. An interesting statement made was that for the first four flights, 14 engines for R25 will be used from the shuttle days along with two additional engines. Those engines, however, are planned to be taken further – to 109 power level versus the 104 power level – than during the shuttle days. Retrofitted with a new controller and new installation, each engine will be taken to more than 500 000 pounds of thrust – each powering that core stage. Pahed also shared some insights into the work he had led on implementing new bonding processes as opposed to the large amounts of welding during the shuttle days. 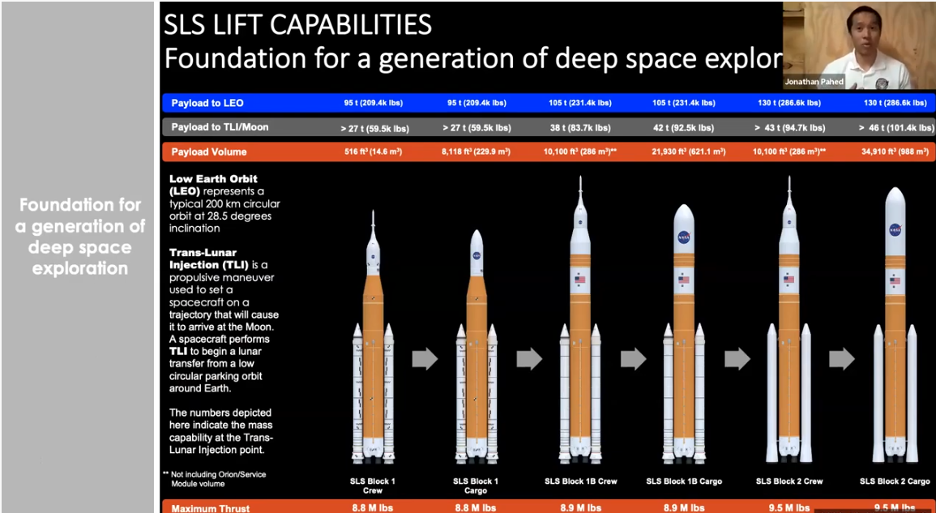 Eric Weaver (Jacobs Space Operations Group) noted that he was responsible for all the technical analysis to receive the process transport stack and subsequently launch the SLS. From the first time, every piece of flight hardware arriving at the space center to the moment that it would leave Earth, made Weaver feel a tremendous responsibility and pride in his work. Amongst other topics, he also reported that despite the pandemic nearly all of the flight hardware components that make up the SLS – the largest rocket ever built – are primed and ready to go at the Kennedy Space Center. With only the core stage remaining to be received at the center, solid rocket booster segments are set to start stacking in the vehicle assembly building in the upcoming months. Touching upon many topics including condition-based monitoring (saving over 11 500 gallons of oil and 5.1 million dollars to the program) Weaver handed over the discussions to the last member of the panel, Mary Popp (Lockheed Martin Space). 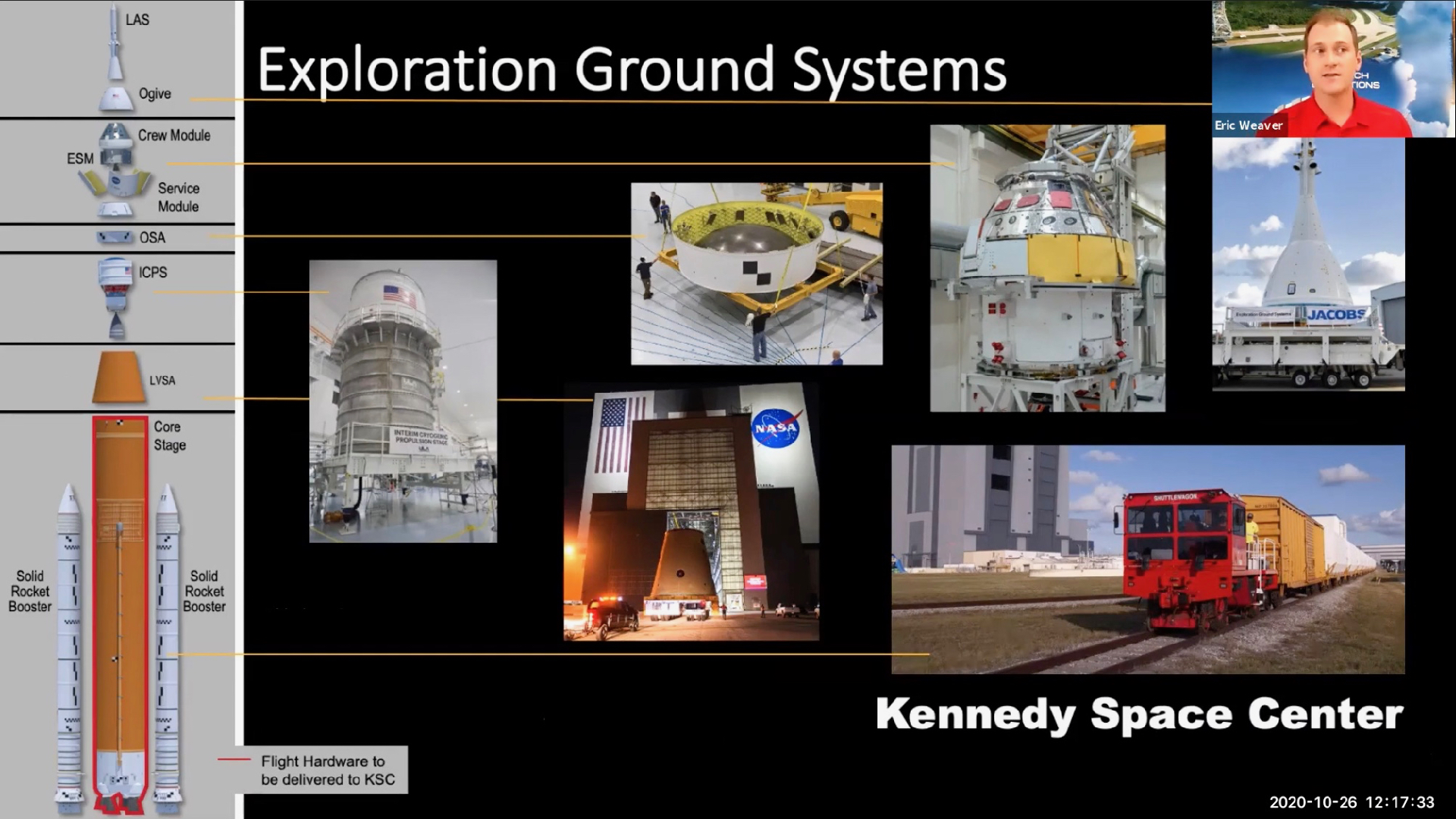 Eric Weaver of Jacobs Space Operations Group noted that he was responsible for all the technical analysis to receive the process transport stack and subsequently launch the SLS at the 2020 virtual Von Braun Symposium. Credit: AAS

As a former Propulsion Engineer on Orion, Popp reflected upon working on hardware integrated on Artemis One and shared her passion for the Orion, one of the most advanced spacecraft ever flown and the most reliable. “[Orion] is the first human rated spacecraft built with the tools of my generation”. She emphasized how all learning curves related to digital twin technology, advanced onboard electronics, and augmented reality could be used in a myriad of ways including in manufacturing where one could reduce the assembly time from 8 hours down to just 45 minutes. She proceeded to announce that the Lockheed has successfully installed the crew module windows that will fly on the Artemis II mission. “The next time a human looks back at the Earth as a little blue dot from the lunar orbit, it’s going to be looking through those exact windows”. 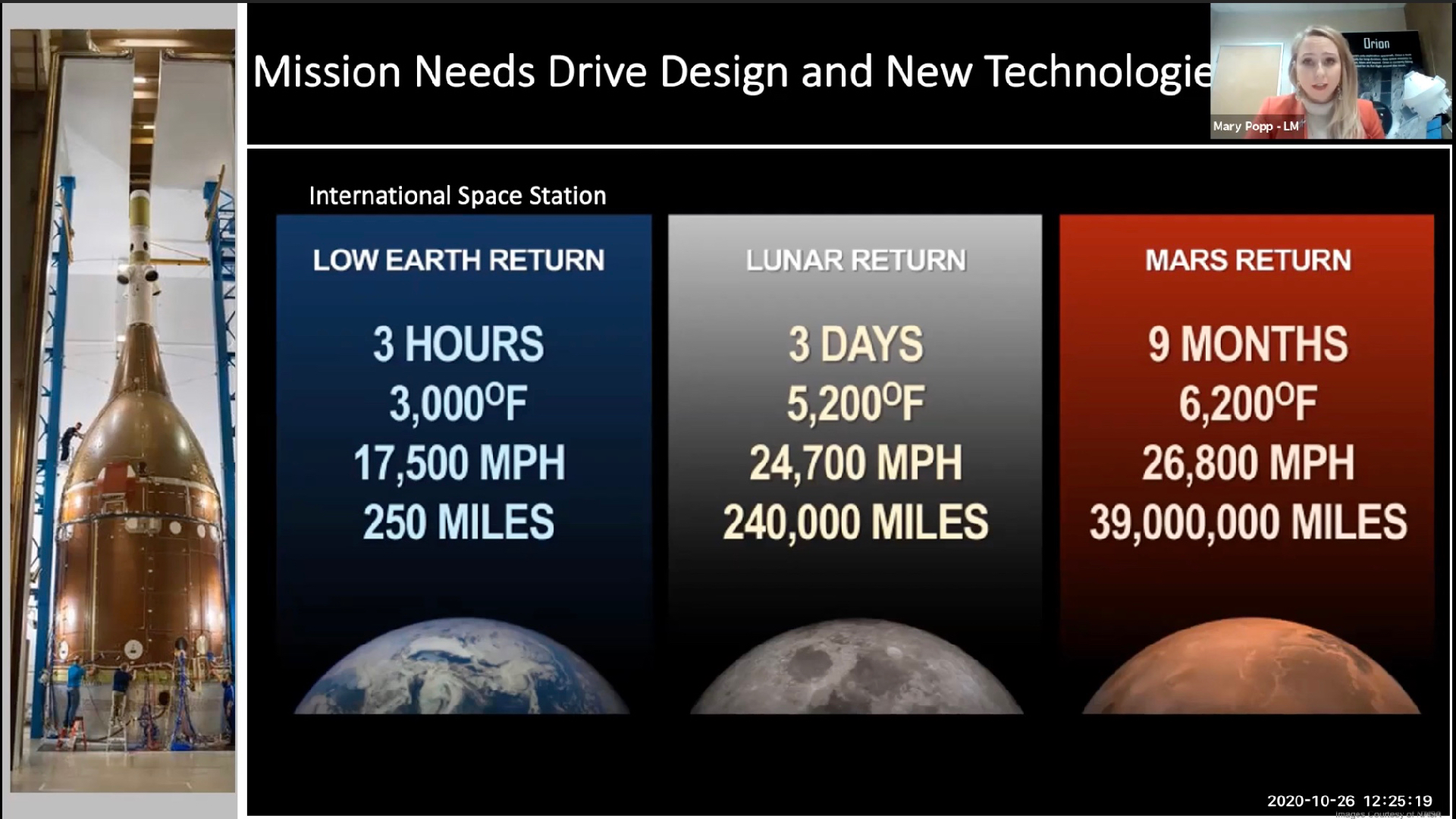 Mary Popp of Lockheed Martin Space discussed her work on the hardware integration for Artemis One at the 2020 virtual Von Braun Symposium. Credit: AAS

With an inspirational outlook about the future, the panel moved to some Questions and Answers and continued to inspire the audience about the bright space exploration future that is currently being shaped by visionaries such as the distinguished panelists.